PCM has attracted the attention due to its jack-of-all-trades status in a data storage industry in which it’s conventional to use different storage technologies for different storage circumstances. PCM has a winning combination of high read/write speeds, endurance, non-volatility and density. It has the power-free reliability of a hard disk drive with the operational speed of flash or DRAM drives. Its only major downfall has been its high price and low storage capacity, but IBM’s announcement indicates that these short-comings may also be brought up to the level of more established drive options. 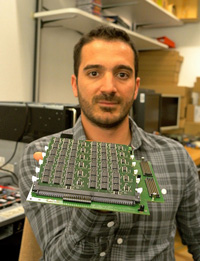 But how does phase-change memory work, and how can we expect it to be implemented in the future? PCM materials come in two basic and stable states: an amorphous phase (meaning it has no clearly defined structure) and a crystalline (with structure) phase. PCM materials exhibit low electrical conductivity in the amorphous stage and high electrical conductivity in the crystalline phase.

Now that IBM scientists understand how to successfully store 3 bits of digital information per cell in a 64k-cell array at elevated temperatures and after 1 million endurance cycles, the applications for this emerging technology can proliferate across new fields.

“Phase change memory is the first instantiation of a universal memory with properties of both DRAM and flash, thus answering one of the grand challenges of our industry,” explained Dr. Haris Pozidis, one of the authors of the paper and the manager of non-volatile memory research at IBM Research – Zurich. “Reaching 3 bits per cell is a significant milestone because at this density the cost of PCM will be significantly less than DRAM and closer to flash.”

This significant boost in density and lowering in cost was enabled in part by IBM researchers’ development of two new technologies: drift-immune cell-state metrics and drift-tolerant coding and detection schemes. The new cell-state metrics are able to measure physical properties of PCM cells that are insensitive to drift due to their endurance over time. These properties affect the stability of the cell’s electrical conductivity as the device is used. In addition, a new coding and detection scheme has been created in order to increase the robustness of the stored data in a cell given ambient temperature fluctuations. Coupled together, these developments make it possible to modify level thresholds that are used to detect a cell’s stored data so that any variations due to temperature change are expected beforehand. The cell state can then be read reliably over long time periods after the memory is programmed, thus offering non-volatility.

Just last month, IBM scientists demonstrated for the first time that phase-change memory could be attached to POWER9-based servers via the CAPI (Coherent Accelerator Processor Interface) protocol, effectively leveraging the low latency and small access granularity of PCM, the efficiency of the OpenPOWER architecture and the CAPI protocol. The demonstration, which occurred at the 2016 OpenPOWER Summut in San Jose, CA, revealed an extremely low and consistent latency for 128-byte read/writes between the PCM chips and the Power8 processor.

While phase-change memory is still in its early phases of production, the emerging technology may well be the solution to our era’s data storage crisis.