This morning, researchers at Trinity College Dublin announced the development of a new method of storing and transferring data. With the intention of packing more digital information into a smaller physical space and then moving that data into and out of data centers at faster speeds, Trinity’s Amber Nanotechnology Research Center has found a way to use individual electrons as memory units.

Professor Michael Coey, a leading researcher on the team that discovered this new technology, also acts as a principal investigator at the Amber center.

“I have studied magnetism for 50 years and I love it,” he said in one interview. “It keeps coming up as a subject, and there is always something new.”

According to Coey, his interest in magnetism began in his early 20’s: “I have worked all my life in magnetism and… I got into it when I was 21 and working in a school in India as a teacher.”

Coey says he became ill and was given a month off to recover, during which he traveled around the country by train. This took a fair amount of time, so he spent much of the journeys trying to figure out what is PhD topic should be. He had brought a copy of The Physical Principles of Magenetism along with him, and by the time he finished the textbook he had found his calling:

“Ant that was it. I have worked in magnetism ever since.”

So how does magnetism factor in to using electrons to store data? Coey’s team has figured out how to make each electron act as a tiny permanent magnet, much like the tiny magnets embedded onto the discs of hard drives.

“Conventional electronics forgot the electron was a magnet,” Coey explains. “It was only when people started looking at magnetic-field effects on electrical conductivity that they began to take account of an electron being a tiny magnet.”

“We found a new material that doesn’t produce a magnetic field but behaves inside like a ferromagnetic material,” he explains. 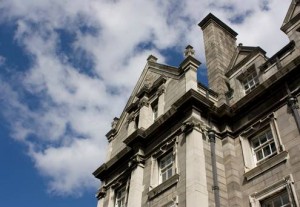 The team of Trinity researchers, which includes experts in magnetism and magnetic switching, have developed a stack of five metal layers, each of which measures only a few nanometers thick. The lower layers are the sole layers capable of storing data, but they are able to store data at such a high density that the technology comprises a breakthrough in magnetic data storage. The new structure also allows for high-speed reading and writing rates that are 100 times faster than systems currently on the market.

“We believe we can make a chip-to-chip transmitter receiver so data rates rise, and we will remove one of the roadblocks,” Coey posits. Coey is also a Fellow of the Royal Society and has been awarded a Royal Irish Academy Gold Medal for his research in the realm of magnetism.

“These are ideas, hopes, possibilities, but [we are] not yet there,” Coey admits. That said, his work has been deemed significantly advanced to be published this month in the science journal Nature Nanotechnology.

The team hopes to reveal a full memory cell based on their new approach using the newly discovered magnetic alloy. Their efforts have already received funding from  Science Foundation Ireland.

If the team succeeds in creating a working prototype, their new contraption may change the world of data storage. The device would need far less electricity to operate than current drives and would emit much less waste heat. That means data centers sporting the new storage technology could be smaller and cost less money to run.