Researchers from the University of Washington recently teamed up with Microsoft’s best engineers to tackle the challenge of encoding data onto synthetic DNA. While the technology has been proven to have potential, its actual application remains limited by the difficulty of actually encoding significant amounts of data this way. That said, the successful joint effort of the UW researchers and the Redmond-based tech mogul has demonstrated that this limit may be more of a temporary limit than an intrinsic shortcoming.

According to an announcement that the team made last Thursday, the researchers have managed to successfully encode 200 megabytes of data onto synthetic DNA molecules; that’s 9 times more than the previous record, backing up the team’s assertion that they’ve reached a new milestone in the effort to use DNA to store the world’s exponentially growing stash of digital data.

200 megabytes can store over 100 books, translations of the Universal Declaration of Human Rights, and a high-definition music video from the band OK Go.

The previous record amount of megabytes to be encoded on synthetic DNA was 22 megabytes.

“This is a concrete example that we can built computers in a very different way, that’s more than just silicon,” explained Luis Ceze, a UW associate professor and the principal researcher of the project. “We’re going to nature to built better computers.”

The advancement of this technology comes at a time when there’s more digital data in the world than has ever needed to be stored before. Storage capacity has become more of an issue than ever for companies and private internet users alike, so money is flowing into data storage research projects like never before.

The DNA storage that the UW is working on would potentially make it possible to store an exabyte (one billion gigabytes) of data in about one cubic inch of DNA material. Considering storing that much technology today would require a warehouse-sized data center, that kind of leap forward in data technology would completely change the tech landscape of businesses and government agencies alike.

“Our goal is really to build systems to show that it is possible,” explained Karin Strauss, Microsoft’s lead researcher on the project.

DNA would also be an excellent solution to the issue of data storage durability. While hard disk drives and flash drives tend to fail every few years, magnetic tape lasts decades, and DVDs can survive perhaps a century, data encoded on DNA could be readable for thousands of years. 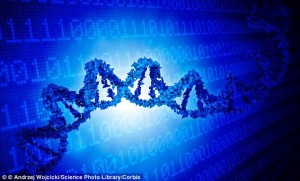 Of course, the technology remains in a highly experimental state and is nowhere close to ready for mainstream markets. As it stands, encoding information onto synthetic DNA is an expensive process and it takes far longer to read information from the DNA than it does for current technology to call up data.

San Francisco-based company Twist Bioscience plays an integral role in most synthetic DNA encoding experiments; Microsoft recently purchased about 10 million synthetic strands of DNA from them earlier this year. Twist is capable of making molecules to researchers’ specifications; this is necessary for encoding as researchers hoping to write digital information onto DNA have to first translate binary language into the letters that correspond to the four nucleotide building blocks of DNA.

When Twist BioScience has received this data recipe and cooked up the corresponding DNA, it sends the strands back to the Seattle lab in test tubes that seem to be full of salt. UW and Microsoft researchers then rehydrate the samples and run the DNA through a sequencer that translates the molecules’ contents back to a binary script.

The project was funded by the National Science Foundation and involved the bringing together of computer-systems architects, molecular biologists and data-storage specialists.