What are Magnetic Skyrmions?

Data storage research seems to be yielding a new revolutionary discovery every single week. Corporations and government organizations have struggled to store their increasingly massive troves of digital data for years now; that means for over a decade, it’s been normal for well-funded organizations to desperately throw millions of dollars at data storage research teams from all around the world. 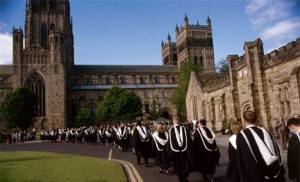 Durham University is the latest hub to take the spotlight; the school’s team of scientists and engineers recently won a $9 million grant to conduct research on “nanosize magnetic whirlpools”, also known as “magnetic skyrmions.” The substantial sum of money came from the Engineering and Physical Sciences Research Council (EPSRC) and will be distributed over the course of the next six years.

The EPSRC is a UK-based organization that provides government funding for grants that will fund research and postgraduate degrees in a variety of fields including engineering and the physical sciences (including mathematics, artificial intelligence and computer science). Since its formation in 1994, the EPSRC has funded a variety of important projects and shares an office building with the AHRC, the BBSRC, the ESRC, the MRC, the Natural Environment Research Council, the Science and Technology Facilities Council, the TSB, the Research Councils UK and the UK space agency.

Most of us have never heard of a magnetic skyrmion; the so-called “quasiparticles” were first discovered in stable states by physicists at the Universities of Kiel and Hamburg in 2011, though they had been theorized to exist as early as 1962. They were discovered experimentally in magnetic materials for the first time in 2009 by British physicist Tony Skyrme, for whom the quasiparticles are named. Put simply, skyrmions are patterns in magnetic fields that can be created and manipulated in the right magnetic materials.

While skyrmions tend to naturally point in different directions when left to their own organization in a vortex, they’re very weakly coupled to these particular patterns and the atoms in the magnetic material. Given a strong force that locks the skrymions into particular magnetic patterns, they’re both obedient and incredibly tiny quasiparticles. 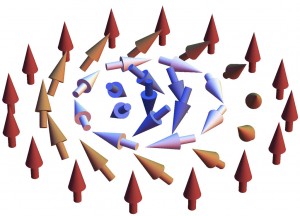 These factors give rise to the great potential of skrymions to be used in a data storage concept. Scientists have already found a way to move a skyrmion using less than one 100,000th of the energy that’s necessary to move a ferro-magnetic domain. That means if these subatomic particles were mastered, it could be possible to create storage technology that uses a tiny fraction of the energy currently necessary for data storage.

Professor Peter Hatton, leading researcher at the Department of Physics at Durham University, will be applying the school’s enormous grant to finding out exactly how to apply these exciting skyrmion traits.

“Skyrmions hold so much promise for advancing our basic understanding of matter and, crucially, for using them as highly efficient memory elements,” he stated. “We will bring together experts in materials synthesis and theoretical and experimental techniques so we can answer questions about the status of magnetic skyrmions and develop technological applications based on this new realm of science, known as topological physics.”

“We will work very closely with industry partners and align our scientific program with the engineering and commercial realities of modern-day information technologies,” he added.

Professor Hatton’s research will make up one part of the larger Skyrmion Project, a national research program that aims to expand scientists’ understanding of skyrmions in magnetic materials and then find helpful applications of that understanding.

Durham University’s research team will make use of a variety of elite technologies provided by teams of technologists and organizations. These include a synchotron, neutron and muon sources located in the United Kingdom as well as globally.