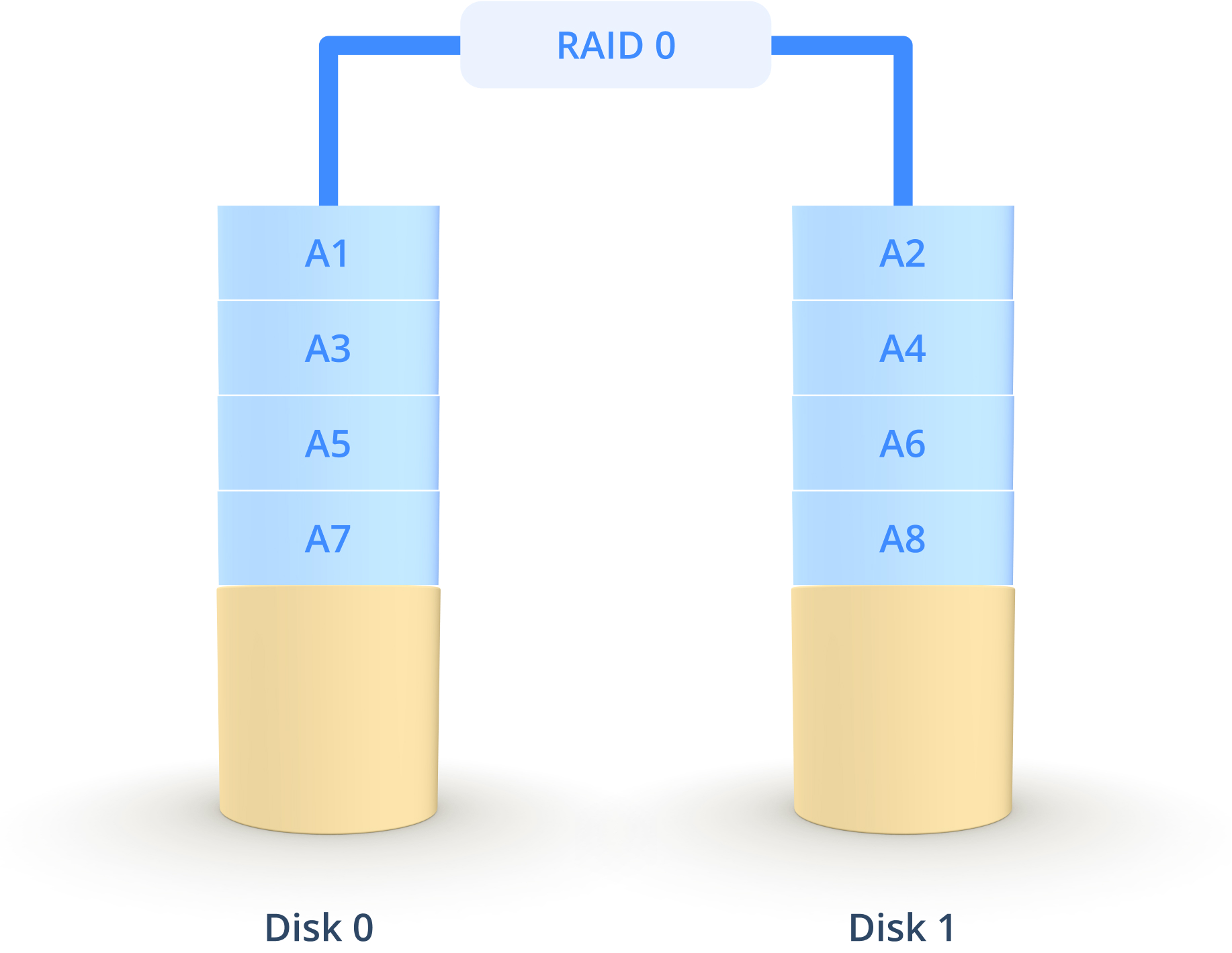 Our free RAID calculator can determine how much usable space you can get with specified number of drives in different RAID configurations.

Are you wondering which RAID level will best suit your specific needs? Or do you want to find out how many IOPS your RAID configuration can produce? When it comes to choosing the RAID configurations, it can be daunting to make the right choice. This happens because users need to compare different RAID levels, their performance, and usable capacity. So, to make things easier for you, we have a developed a comprehensive RAID Calculator. At Platinum Data Recovery, we believe that for every complex problem, there is a viable solution. And with that in mind, we have created a tool to find out what the usable capacity is for a given RAID configuration. Besides finding out the usable capacity of your RAID array and the unavailable space, this calculator also helps in comparing different RAID configurations based on their performance, storage capacity, fault tolerance, and cost. With this RAID Calculator, we aim to help you make an informed choice about the configuration of your next RAID array. Here you can calculate the usable capacity of the common RAID levels, such as:

What is a RAID Array?

If you’re new to configuring a RAID array, it’s better to first get familiar with the RAID technology. This technology was introduced to replace expensive disks by combining multiple inexpensive disks into a single array.  The large and expensive hard disks were reliable but eventually, all hard drives fail. Unless you maintain consistent data backup, a hard drive failure means complete data loss. Over the years, more economical HDDs were introduced but these were more at the risk of failure. So, to avoid the problem of frequent failure and data loss, multiple disks were combined to act as one. This technology is known as RAID- Redundant Array of Inexpensive Disks or Redundant Array of Independent Disks. This concept was based on the fact that an array of cheap magnetic disks can surpass the performance of reliable, yet expensive mainframe drives. RAID combines multiple inexpensive disks into a single logical unit to achieve greater performance and increased fault tolerance. However, the speed, reliability, and overall performance of the RAID system entirely depend on the type or level of RAID level you choose.

RAID distributes data among the drives (HDD or SSD) in one of several ways called RAID levels. Each RAID level has certain pros and cons and your choice will depend on whether your preference is a high performance, superior reliability, low cost, or something in between. However, no matter which RAID configuration you pick, no device is 100% immune to failure and data loss. Now before we compare different RAID levels, let’s first take a quick look at the common RAID techniques.

All RAID levels use one or a combination of the following techniques:

If performance is your only concern then RAID 0 can be the right choice. This RAID type uses a stripping technique to splits data across drives and achieves higher data throughput. This type of configuration needs a minimum of 2 hard drives to double the performance of a single unit. In RAID 0, both writing and reading happen simultaneously and that results in speeding up the performance. It means that if your RAID 0 consists of 3 disks then you would get 3x the read and write performance. RAID 0 ensures high performance, however, a single drive failure results in complete data loss across the whole array. RAID 0 is best suited for video streaming or gaming but not the right choice for applications where data loss can be devastating.

RAID 1 works on the mirroring technique and copies identical data across the drives that provide fault tolerance and reliability. This RAID level uses a minimum of 2 drives and data is mirrored (copied) to all drives to achieve full redundancy. It means that if one drive fails, users can restore their data from the other drive. This RAID level provides protection in the event of a single drive failure but the performance is not at all as good as RAID 0. Since RAID 1 writes the same data to both disks simultaneously, the write performance of the array is the same as writing to one disk. Moreover, it’s not scalable because adding more disks would increase the cost per usable capacity. Because data is mirrored, adding more disks will give only a third of the total capacity of the disks. So, it is best to use only 2 disks in your array. Also, RAID 1 works best for applications that need protection against data loss and higher storage capacity is not needed.

Similar to RAID 0, this RAID level also strips data across all disks. However, unlike RAID 0, RAID 5 is more fault-tolerant because it uses disk striping and parity to spread information across all drives to rebuild data if needed. RAID 5 needs a minimum of 3 disks- two drives for the actual data and one for the parity. This RAID level provides high performance and reliability. It has fast write speeds and parity allows recovery in the event of failure of any single drive. However, during the rebuilding process, the array will be vulnerable to another disk failure and that might lead to complete data loss. In RAID 5, one drive works as a parity drive which means that the maximum read speed of the array is a factor of the number of disks minus one. Also, an entire drive is used to store parity reduces the aggregate amount of usable space.

Similar to RAID 5, there is RAID 6 that consists of block-level striping but with double distributed parity. RAID 6 has an extra parity block that provides fault tolerance up to two failed drives. It requires a minimum of 4 drives and the configuration can withstand 2 drives failure simultaneously. RAID 6 is twice as fault-tolerant as RAID 5 with a reading speed as fast as RAID 5, but comparatively slower write speed due to the additional parity. The higher fault tolerance of RAID 6 makes it a good option for standard web servers. However, it may not best suit heavy write environments like a database server.

RAID 10, 50, and 60 are nested RAID levels that combine RAID 1, 5, and 6 with striping (RAID 0) to achieve superior performance. RAID 10, also written as RAID 1+0 combines RAID 0 and RAID 1 with a minimum of 4 disks. This RAID level provides RAID 0’s high performance and RAID 1’s fault tolerance in one single system. It consists of two or more sets of mirrored disks striped together. This configuration can withstand 2 disk failures simultaneously- one per mirrored set. However, similar to RAID 1, here also only half of the total drive capacity is available. Also, RAID 10 is more expensive than RAID 5 or RAID 6 arrays.

RAID 5+0 is a combination of RAID 0’s block-level striping with the distributed parity of RAID 5. This configuration combines several RAID 5 arrays and strips them together. With a minimum of 6 drives, RAID 50 can sustain one disk per sub-array failure without data loss. It means that a RAID 50 array with three RAID 5 sets can withstand 3 drive failures simultaneously.  This configuration is expensive and more complex but performance and fault tolerance is much superior with usable capacity starting at 67%.

RAID 6+0 is a combination of RAID 0 array striped across RAID 6 elements. With a minimum of 8 disks (2 sets of 4 disks), RAID 60 consists of several RAID 6 sub-arrays striped together. It means that RAID 60 can withstand two disks failure per sub-array without data loss. It has extreme fault-tolerance capacities but read performance is less than RAID 50.

How to Choose the Right RAID Level?

When it comes to choosing the right RAID level, you need to consider your application needs. If your primary concern is to avoid data loss and need fault tolerance with fast rebuild times, then RAID 10 is the right choice. On the other hand, RAID 0 can be perfect for applications like gaming that don’t need fault tolerance and only performance matters. Your choice may also depend on your budget. RAID 0 is one of the cheapest options while others like RAID 10 or 60 would require an expensive setup. Typically, RAID 5 and RAID 6 are best suited for small to medium-sized enterprises that need a good combination of fault-tolerance and performance. RAID 10 and other higher configurations work well for big data operations such as server farms and data centers. However, if you’re unable to make the right decision, our RAID Calculator can help you compare different configurations and make an informed choice. So, now let’s take a quick look at how to use it.

How to Use Platinum Data Recovery RAID Calculator?

Platinum Data Recovery has developed this free RAID calculator to determine how much usable disk space you can get with the specified number of hard disk drives in different RAID configurations. Our RAID Calculator supports: RAID 0, RAID 1, RAID 5, RAID 6, RAID 10, RAID 50, and RAID 60. To calculate the usable capacity of any RAID level, you need to enter specification details like the number of disks used, the size in TB (terabytes) of each drive, and the RAID level. Now click the Calculate Usable RAID Capacity button to get the result showing the usable capacity of your RAID array and the unavailable space.

Here is a step-by-step guide to correctly use our RAID storage calculator:

Want to display this infographic on your site?

Copy and Paste the embed code below