Which Hard Drive Brand Is the Most Reliable?

Considering your priceless memories and career-enabling information can be stored on a single drive, you can probably benefit from a better understanding of different hard drive brands and what you can expect from them. After all, when you’re choosing your hard drive, you’re deciding where and how to keep your data as safe as possible. Any drive you buy today will fail eventually, but the more reliable your drive is, the longer you should be able to use it (though you should still be backing up your data regularly!). The challenge many end users are facing is how to choose the most reliable hard disk drive from the dozens of different brands and hundreds of different hard drive models.

A study conducted by cloud-based online backup tool Backblaze might help you to make the right decision. A group of engineers and enthusiasts from the USA founded Backblaze in 2007 year. Their core business is a cloud storage and data backup. They took note of how many of its data center’s hard drives failed over the course of a year. Backblaze releases reports every quarter and they are very much appreciated by the community.

The most common hard drives tested by Backblaze are HGST (Hitachi Global Storage Technologies), Seagate, Toshiba, and Western Digital. They are all known for producing high-capacity drives that compromise slightly on data performance. They’re somewhat slower than solid-state drive alternatives, but offer a whole lot of storage. The capacity of tested disk drives goes from 4 TB to 16 TB, depending on the disk model. The first test by Backblaze

In the first test performed in 2021, Backblaze did an observation on 171,919 hard drives spread across four data centers. 348 hard drives failed which is equal to 0.85% of the overall annualized failure rate (AFR).

The second test by Backblaze

In the second test performed in 2021, the story was a bit different. Backblaze tested 177,935 disks, 439 failed which is 1.01% of the overall annualized failure rate (AFR). It is a bit higher than in Q1, but we should also consider that amount of tested disks was increased by 6016 drives. Only three hard drives recorded zero failure. These are Seagate ST6000DX000 and WDC WUH721816ALE6LO; the same model as in the first test, and then HGST HUH721212ALE600. According to both reports, we can conclude that Seagate ST6000DX000 and WDC WUH721816ALE6LO were the best performers in this competition.

According to Backblaze; the average age of Seagate ST6000DX000 is over six years (74 months). With the one failure over the last year, this drive is aging quite well. The disk WDC WUH721816ALE6LO has only been installed for three months, but no failures in 624 drives are a great start. HSGT HUH721212ALE60 resides in Dell storage servers. After recording a quarterly high of five failures last quarter, they are back on track with zero failures in Q2 2021 and a lifetime failure rate of 0.41%. You can find more details in the table below. 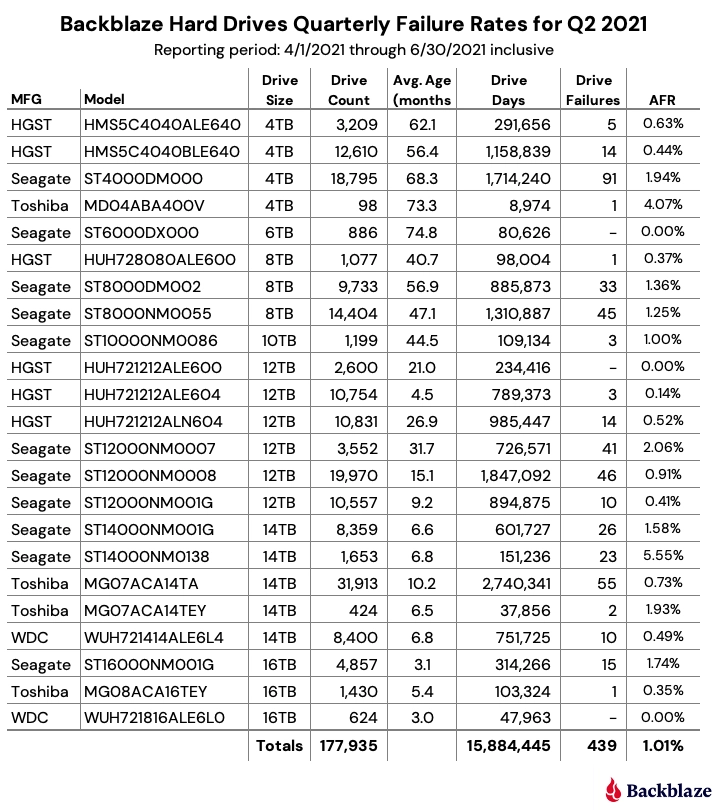 The Shortcomings of the Study

The BackBlaze report provides good insight because it employs thousands of hard drives for storage. That makes it one of the best sources of information to find out the reliability of hard drives. However, Backblaze’s report is not perfect and has been subject to controversy. It is said that the company has changed its storage pod designs and that might have impacted the reliability of a certain cluster of drives. The company has also used consumer drives in an enterprise setup and had run those on a 24/7 duty cycle. Moreover, the numbers were found when looking only at manufacturers and not taking into consideration different models and capacities. When BackBlaze measured the failure rate of its data center’s 4TB drives, it found that Toshiba drives actually failed the most often, followed by Seagate.

At the end of the day, it’s still difficult to figure out which manufacturer to trust.

According to the last test, obviously, for 4TB drives, you should consider skipping Seagate and opt for Toshiba and HSGT. However, even among different capacity drives there are different models at different price ranges that can be expected to be more or less reliable over time.

For example, Backblaze found that the specific models of the Seagate 6 TB, HSGT 12 TB, and WDC 16 TB,  have had a 0 percent failure rate in 2021 – which is quite impressive. And they can be one of your next disks.

We can conclude that reliability and failure disk rates depend on the disk models and the environment where they are running. One additional metric we should also consider before purchasing disk would be MTBF (Mean time between failures). For example, the MTBG of Seagate ST6000DX000 is 1.4M of hours.

So it all becomes somewhat confusing and complicated once you really begin to sort through all the information with the intention of figuring out which drive manufacturer and model is going to be the best and most reliable for you. Luckily, unless you’re actually in the business of data storage, these tiny percentage differences won’t make that big of a difference for you. Just keep backing up your data and you shouldn’t have to deal with any data loss disasters any time soon.