Did your CF (Compact Flash) card become corrupted or isn’t working anymore? Have you accidentally formatted or deleted photos or videos from the CF card? Platinum Data Recovery offers CF Card Data Recovery with the latest equipment and experience to recover your data.

Our expert engineers have the knowledge to successfully recover your data and photos from damaged or corrupted CF cards. For more than 15 years, we have saved countless digital photos and videos from tens of thousands of CF cards sent by professional photographers, video production companies as well as individuals.

No matter how you’ve lost your data, Platinum Data Recovery is well-known in the data recovery industry for recovering all your lost data. We are even trusted and recommended by major camera and memory card manufacturers for our outstanding services. We restore thousands of images and other files each day which gives you a guarantee that your data is in safe hands.

One of the most popular logical failures is file or structure corruption. As a result, you may see your device asking to format your card when connected. In cases like this, do not format the card. If you were not careful enough and you deleted photos from your CF card by mistake, it can be considered as a logical failure. Another possibility is if you moved your CF card when operations were still running, which could result in data loss. Sometimes, even unexpected occurrences like power failure may lead to files becoming corrupted. Whatever the case may be, if you don’t have a backup of your precious data, call us to get your data back.

Though SanDisk was the first manufacturer of CF cards, other companies like Lexar, Sony and Nikon have begun producing their own as well. The cards vary in size (3.3mm to 5mm thick) and speed (CF+, CF2.0, CF3.0 and CF4.0). We work with brands including, but not limited to:

What is CF (Compact Flash)?

A Compact Flash card (CF card) is a memory card format developed by SanDisk in 1994 that uses flash memory technology to store data on a very small portable device. A flash is a non-volatile form of memory, which helps store data on a device to retain. The cards are based on the Parallel Advanced Technology Attachment (PATA) interface, with a dimension of 42.8 mm by 36.4 mm (about the size of a matchbook) and are available with storage capacities ranging up to 512 gigabytes (GB).

CF cards are divided into two based on their thickness, to accommodate different capacities of storage. The type I CF cards are of thickness 3.3mm and Type II CF cards come in a thickness of 5.0 mm. A CF card features solid-state construction, which makes it much more rugged than most traditional storage devices. Originally CompactFlash was built using Intel’s NOR-based flash memory, but later it adopted NAND technology which is better suited for large amounts of data storage. The speed calculation method is similar to CD-ROM and each card has an embedded speed limit. Normally, the standard speed is up to 150kbps.

CF cards are primarily used as removable memory for higher-end digital photo and video cameras. In 2008, its new variant CFast was announced. The latest CompactFast is based on the Serial ATA interface which provides a better transfer rate as compared to the traditional variant. 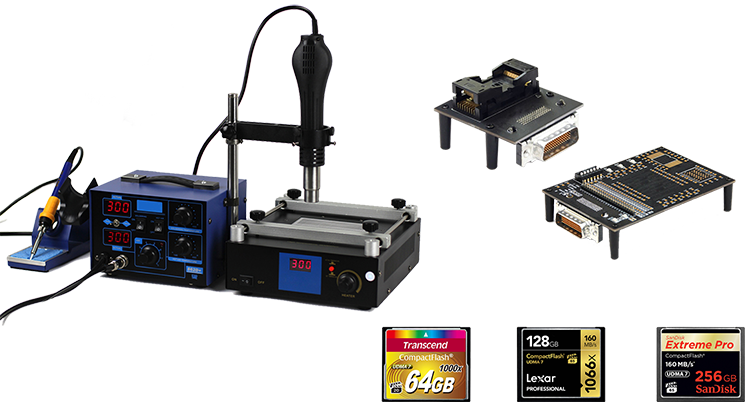 CF cards are a bold innovation by SanDisk and are widely being useful in an array of different applications. They are as reliable as any other flash-based storage media and offers great flexibility. However, like any flash-based storage card, a CF card is subject to limitations. CF cards have a limited overall lifetime which disables them to be utilized for years and years. Even the top manufacturers of this product recommend utilizing the card for only 2 years in a row.

Though CF cards are physically reliable, they can be susceptible to many logical problems. Corrupted files may occur if the card is removed during a video shoot, or even when the camera battery is low and not providing reliable power to allow the card to write. Occasionally, physical damage can occur with exposure to contaminants, water submersion, or improper insertion.

Things You Need to Know About CF Cards Data Recovery

CF cards are used primarily in portable electronic devices such as digital cameras and video recorders. Whether you’ve accidentally deleted photos or your files got corrupted due to any reason, in most cases we can recover your lost data from a CF Card. We have skilled engineers and advanced recovery hardware, which in some cases, enables us to recover your files without having to disassemble your card.

Typically, CF cards fail due to two reasons- physical damage or logical failure. We at Platinum Data Recovery make sure to recover your lost data in any such condition.

Why Choose Us for CF Card Recovery?

Solution for All Kind of Devices – Our data recovery experts are qualified and experienced to recover lost data from all kinds of devices. We have tools and expertise to retrieve your lost files from all types of digital storage devices in any type of data loss situation. Our friendly staff will assist you with a regular update on your job, as well as provide you a price quote.

Reasonable Price – When you choose us, you don’t need to worry about hidden costs. As a reliable company, we charge a reasonable price so that you can get back your valuable data within your budget. We provide a transparent quote before starting the recovery process so that you know what you’re going to pay.

Higher Success Rate – We are trusted by many big organizations because of our high success rate. We utilize the latest technology and best methods to evaluate the cause and extent of data loss. Our efficient diagnosis process is followed by a successful data recovery process to ensure maximum data recovery.

How To Improve the Chances of Recovery?

We recover data from CF cards daily and understand that the pictures and videos you take are important to you. Our engineers have at their disposal the latest equipment and software needed to retrieve your data safely and securely. We offer comprehensive recovery services and have the highest success rate in the industry. Don’t put your data at risk!

What if computer or camera does not recognize my CF card?

First make sure to check the card on another computer. In case if another system is also not reading your card in disk management in Windows or disk utility in MAC OS, it means there’s an issue. If your storage device is not accessible or data is not showing in the readable format, you would need the help of professionals to recover your data.

Can you recover deleted photos from the CF card?

If you have accidentally deleted photos or videos from a CF card, we can try to recover them. No matter how you’ve lost your data, Platinum Data Recovery can try to restore your lost images and other files. We have over ten strong software that can be used depending on different case scenarios. We have a separate page dedicated to deleted or formatted data.

What should I do if I lost my data be deleting/formatting?

The most important thing to do is to stop using the damaged media. You must avoid writing new data into the card otherwise you may permanently lose your files. You can read more here.

What measures do you take to guarantee the security & privacy of my data?

At Platinum Data Recovery, your data is treated with the utmost care and protection. We maintain 100% confidentiality of our client’s data because we value your privacy and secrecy. Our customers include top-level companies, government offices, as well as individuals. We keep your storage devices in a controlled environment and only our recovery specialists have access to it under tight security. “The people at Platinum Data Recovery are absolute Miracle Workers… [they] taught me a great lesson about backing up my data. I can’t thank them enough!!”