For the past few decades, portability has become an increasingly important factor when it comes to purchasing new technology. Laptops can weigh as little as two pounds, and smaller and lighter tablets and smartphones sell at rates of 100 million or more per business quarter. Then there’s the growing craze around “wearable” technology, like fitbits and apple watches, that take portable tech to entirely new frontiers. At this point in time, it’s hard to believe that the first “portable” computers weighed a whopping 53 pounds. 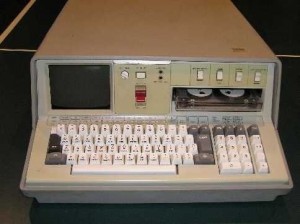 An IBM brainchild born in 1973, the SCAMP or Special Computer APL Machine Portable wasn’t meant to sit in your lap; it was impressive enough that the computer could be installed relatively easily into a room. By 1975, IBM (with the help of Intel) released the 5100, a single unit with a 5-inch CRT display, a keyboard, a 200K tape drive for storage and a processor. The computer cost $20,000 (in 1975) and was meant for only the most serious computer users, mainly scientists and programmers.

It’s worth noting at this point that a portable computer is actually different than a laptop. A laptop is a computer that, obviously, could actually sit in your lap. The first bonafide laptop appeared in 1983 and had a screen that could only display four lines of 20 characters each. Produced by Epson, the HX-20 weighed 3.5 pounds, had four rechargeable batteries, and the data-storage device was literally a mini cassette recorder. The following is a review of the HX-20 published in a 1983 copy of Creative Computing magazine:

“For working on a plane, train or away from the office, the HX-20 is unrivaled. How often I have dreamed of having a spreadsheet of work processing computer with me on cross country or transatlantic plane trips! It would seem that the HX-20 is the answer to these dreams.”

The HX-20 had as small dot-matrix printer that printed on adding machine tape, and eventually was outfitted with a flip-form design, which made it look more like a laptop but still did little to nothing to revise its retro form. It was the first computer built to be easily carried from place to place and used on one’s lap, making it the first laptop. 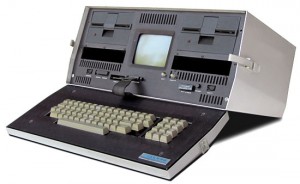 However, there were other “portable” computers that came out before the HX-20 and were at least a step more portable than the desktop computer. For example, the Osborne 1 came out in 1981 and weighed only 23.5 pounds. It was clearly more portable than, say, the afore-mentioned IBM 5100, but buyers weren’t expected to operate the heavy machinery from their laps. It also had no battery supply other than an optional battery pack that only supplied charge for an hour of use. So in that regard, it wasn’t fit for taking on trips or using during travel. The only thing distinctly portable about the Osborne 1 other than its weight was its ability to close up (it was equipped with a fold-down keyboard) and the heavily-marketed fact that it could fit underneath an airline seat. It goes without saying that it likely would break an airplane tray table, but the Osborne 1 was a crucial step between 50-pound desktop computers and the HX-20.