Different Types of Drives and How to Choose the Right One

If you’re looking to buy a new laptop or need to expand the storage capacity of your system, it becomes crucial to choose the right hard drive. All computer systems use some type of hard drive to store data.  As the most vital data storage device, the hard drive you choose can make all the difference. But the availability of several hard drive options makes it confusing to pick the right one that suits your specific needs. There are different types of hard drives with different data storage capacity, speed, and other features.

As one of the most fundamental forms of data storage and processing, hard drives stores all the software installed on a computer, as well as all the data files created by users. Unlike temporary memory such as random-access memory (RAM), hard drives provide a permanent storage solution. This means that all your data including photos and music is safely stored in the drive even when your computer is turned off. The first hard drive was introduced in 1956 by IBM. Since then the hard drive technology has kept on evolving and superior drives are being designed. Unlike traditional drives, modern hard drives offer higher storage capacity, faster processing, and a better user experience. So, to choose the right hard drive, you need to first know the different types of drives available and what makes them different. 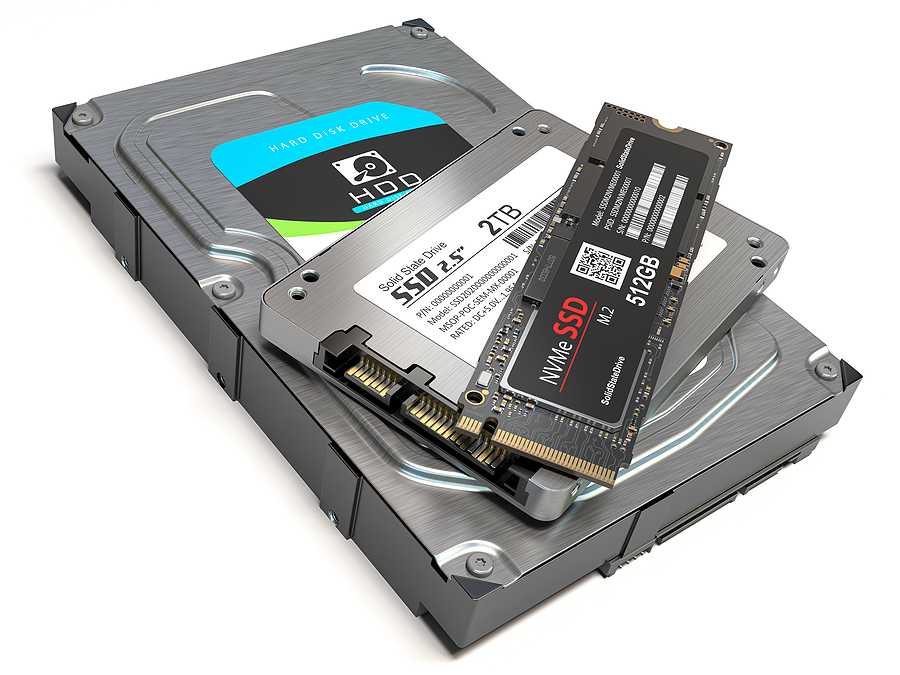 Different Types of Hard Drives
All hard drives can be classified into four types- PATA, Serial ATA, SCSI or Small Computer System Interface, and SSD or Solid-State Drive. Parallel Advanced Technology Attachment (PATA) is one of the earliest hard drives that are capable of data transmission rates of up to 133 MB/s. These drives store data on a rotating disk using magnetism. Another type is the Small Computer System Interface (SCSI). These hard drives used a 50-pin flat ribbon connector that connects the drive and other peripheral devices to computers. The new versions of SCSI can transmit data up to a rate of 80 MB/s.

As compared to the other two types mentioned above, Serial ATA (SATA) hard drive is most commonly used today. Most of the mid-range laptops and PCs have a SATA hard drive because these drives can be supported by virtually all computer motherboards and operating systems. The desktop computers usually have 3.5-inch SATA drives while laptops have a small 2.7-inch version. SATA drives are affordable and a good option for gaming consoles. This type of drive offers sufficient storage capacity and good transmission speed. As compared to the 133 MB/s speed of PATA, the latest SATA drive has data transmission rates of up to 600 MB/s. Furthermore, hard drives can also be classified as Solid State Drive, Solid State Hybrid Drive, and Hard Disk Drive.

Solid State Drive
The solid-state drives (SSD) are commonly found in high-end laptops. These drives are also available as external drives for extending storage capacity and allow users to take their files on the go. Unlike traditional hard drives, SSD doesn’t rely on magnetic storage technology. The SSD technology stores data in semiconductor chips. It lacks spinning disks or any other moving part which makes it less vulnerable to damage and HDD data loss. SSD uses NAND-type flash memory and consists of transistors and other electrical components. The flash memory chips provide faster data access. The lack of moving components makes SSDs faster and more reliable. However, SSDs can be costlier than HDDs.

Hard Disk Drive
The magnetic hard disk drive (HDD) comprises rotating discs and relies on magnetic storage. This type of traditional drive is commonly found in regular desktop computers. HDD comprises a mechanical arm that moves to read and write the data on a particular location. There is a platter and each platter has 2 read or write heads. These drives are inexpensive and can be used to store a large amount of data. However, the moving parts make HHD vulnerable to damage and also slow down its performance. HDD uses more power and may create noise while working.

SSHD – Solid State Hybrid Drive
To achieve a large storage capacity of HDD and fast speed of SSD, a new type of hard drive is designed known as Solid State Hybrid Drive. SSHD is a combination of both SSD and HDD which means it provides storage capacity like HDD and working performance like SSD. This type of drive uses NAND flash memory. SSHD drives spin less and lasts much longer. However, the HDD part of the drive is still susceptible to damage.

How to Choose the Right Hard Drive?
Now comes the main bug question- how to choose the right hard drive. When it comes to picking the right drive, you should consider a few things. First, you need to decide whether you want an internal or external hard drive. Then you have to think about the storage capacity. Other factors to consider include performance, compatibility, and reliability.

Storage Space
Depending on your storage needs and budget, you can find drives up to 16 TB. If you’re looking for higher storage capacity then consider SATA hard drives such as Western Digital 1 TB HDD. If the price isn’t an issue then you may also find SSDs in higher capacity.

Performance
If speed matters to you then invest in an SSD. These latest hard drives load faster and are less prone to failure due to mechanical damage. SSDs have a high read/write performance that allows multitasking. If you need a combination of performance and low cost then consider the hybrid option. SSHD is a better choice for data centres and computers for industrial use because it contains magnetic elements of the HDD and an SSD type of flash memory.

Reliability
Another factor is the reliability of the drive. As mentioned above, HDDs have a higher failure rate than SSDs. Also, SSDs can better withstand higher extremes of shock, drop, and temperature. SSHDs, on the other hand, use both flash and HDD portions which makes it highly reliable. Besides reliability and durability, you should also think about the interface. The drive’s interface such as SCSI, IDE, Serial ATA, SAS, Fiber-Channel, will impact the data transmission speed. The choice of the interface depends on the internal architecture of the PC.