The Library of Congress Stored on a Dust Mite

Nanoscientists at the Delft University of Technology in the Netherlands have just found a way to store re-writable, digital data so densely that the entire Library of Congress could be stored in a space the size of a dust mite.

This new technique involves placing individual chlorine atoms onto a flat sheet of copper in such a way that scientists could write a 1 kilobyte message at 500 terabits per square inch. That rate comes out to about 100 times as much data being stored per square inch than is stored in the most efficient hard drive ever created. According to research leader Sander Otte, the method would make it possible to copy every book ever written onto a flat copper sheet the size of a postage stamp. 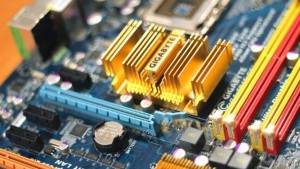 “The density is two to three orders of magnitude beyond current hard disk or flash technology. An advance of this size is remarkable, to say the least,” explains Steven Erwin, theoretical physicist with the U.S. Naval Research Laboratory. Erwin wasn’t involved in developing the new technique, but he wrote an essay which was published in conjunction with the Netherlands team’s scientific paper.

The Delft University researchers’ success brings to mind a famous speech given at CalTch in 1959 by renowned physicist Richard Feynman. The speech, titled “There’s Plenty of Room at the Bottom,” suggested that there was huge potential for data to be stored at the level of individual atom.

Otte built upon Feynman’s musings, finding a way to use individualized atoms to encode a short section of Feynman’s speech onto a copper tablet only 10 nanometers wide and tall. For perspective, that is a space so small that it could fit on the surface of a Flu virus. To demonstrate that their method enabled re-writing, the team then cleared the space and typed out a segment of On the Origin of Species on the very same individualized atoms.

While the method used by the Delft University research team is obviously complicated, a simplified explanation can be given as follows:

The breakthrough began when the researchers discovered that they could put chlorine atoms onto a cold grid of copper metal in such a way that they would form into perfect, alternating squares, similar to those found on a checkerboard. One square would contain the chlorine atom, and the squares directly next to it would not. The researchers then found that they could use a tool called  scanning tunnelling microscope to scoot the chlorine atoms around on the grid, similar to the sliding block puzzles found at dentists’ offices and whatnot. 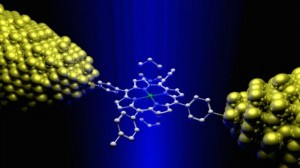 In order for these copper tablets to maintain their meaningful composition, scientists have to keep them in hyper-cold temperatures and isolate them in a vacuum. As it stands, it’s impossible to develop the technology into something usable by the masses, “so the [practical] storage of data on an atomic scale is still some way off,” admits Otte. “But through this achievement we have certainly come a big step closer.”

Another noteworthy downside to Otte’s method: it takes one to two minutes to read only a few short sentences, and writing them takes about 10 minutes.